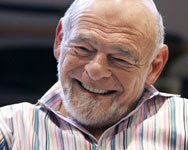 From: The Fake Angeleno — Blogosphere Crackpot

It was my pleasure to hear you speak last month at the Hammer Museum.  I’d never seen a real, live plutocrat in person, and I have to say I was pleasantly surprised by your no-nonsense style of delivering intelligent observations and opinions.  Also: your sense of humor was completely disarming.  Amongst the many strongly held opinions you shared that night, there were two that really stood out to me:

1.  You maintained the current turbulence in the credit markets is a temporarily painful sorting out process, and that all the other bad economic indications reported lately do not point to a fundamentally weak economy.  Your basic point was this: Despite loads of political and media rhetoric to the contrary, the economy will be fine and it remains to be seen if we are even in recession. (PS: I hope you’re right.)

2.  You feel there is too much opinion seeping into newspaper journalism.  You maintain that the news and the editorial sections of a paper should be kept strictly separated.  You said very clearly: A newspaper’s main job is to report the facts.

So you can imagine my surprise this morning when, at bottom right on the front page of the L.A. Times I found this story: Why This Downturn Doesn’t Portend Another Recession  Is that a fact?  How can we know with certainty?  To me, it looks an awful lot like an opinion piece  has cracked the front page of the Times.

I also was disappointed the story quotes only three primary sources, none of whom break any news.  Ironically, the first quote from an original source is pure (albeit expert) opinion:

I’ve been asked many times whether we will have another Great
Depression," said David M. Kennedy, a Stanford University history
professor and the author of "Freedom From Fear," a Pulitzer
Prize-winning history of the Depression and World War II. "My standard
answer is that we won’t have that one again — I’d be surprised to have
one of that seriousness and duration. But that doesn’t mean we wouldn’t
have a catastrophe we haven’t seen before."

I don’t want to "Fisk" this article any further because I don’t have time, but I will mention one more point.  I was shocked, shocked to see that the article was continued after the jump under the subhead Policy Profits From Lessons of The Past.

Some people would beg to disagree.  In fact, David Frum’s opinion piece on Marketplace yesterday disagrees in pretty strong terms.  You can read it here: Forgetful Fed Repeats Errors of Past.

My goodness, Mr. Zell!  You’ve got me hot and bothered enough to link to David frumming Frum on my personal blog.  That’s a first.

I’ll close with a question: Do you plan to send a memo to the editor responsible for the placement of this story?  And will this note be to let him/her know you heartily agree with him/her that no depression is on the way?  Or will the memo state your strong condemnation of running an opinion piece on the front page?  If you’re the kind of guy I think you are, I suspect you’ll mention both…

P.S. Since this is the blogosphere, I might has well take a gratuitous and most-likely-unfair pot shot at the writer of the article, Michael Hiltzik, and ask if he bears any resemblance to The Wire’s Scott Templeton?  You know: the ambitious guy that curried favor with the big bosses by writing exactly what they wanted to see?  Wow, maybe he does.