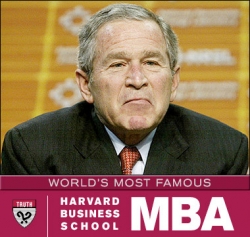 Says the AP: Bush backed off strict mortgage rules in '06, caving to banking-industry pressure.  The rules were "remarkably prescient."

Bush also told ABC's Charlie Gibson his biggest regret as President was the Iraq intelligence failure.  "I wish the intelligence had been different, I guess," said the departing commander-in-chief.

I know the "Emperor Has No Clothes" metaphor has been done to death and back again, but the guy looks pretty naked, helpless and pitiful right at the moment.