The Legend of the Pumpkin Pictures:

For the last seventeen years, Alysia and Chris have engaged in a
ritual. Every Autumn, when pumpkin merchants put their wares on
display, Alysia takes a picture of Chris standing in or around the
seasonal gourds. The only rule? He must be holding last year's picture
in his hand. 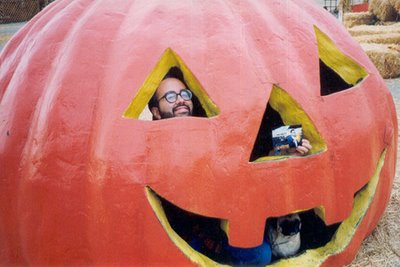 Honestly, this is one of the greatest things you'll ever see on the internet.  I mean … why wasn't I clever enough to have myself photographed with pumpkins every year for nearly two decades?  I suppose the best I can do is start a Thanksgiving turkey pic series this year and get back to you sometime during Chelsea Clinton's second term.