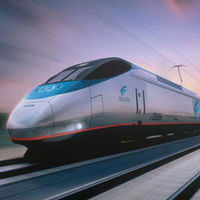 I'd meant to post some measured and weighty commentary here on each of California's twelve ballot propositions, but a busy working schedule has gotten the best of me.  I'm afraid my blog reasoning about how to vote will have to be severely elided.  Still, I'm going to try to give it a shot

First off, here's a decent summary of proposition 1 on Ballotpedia.

Prop. 1 asks voters to approve the issuance of $9.95 billion of general
obligation bonds. This would partially fund a $40 billion, 800-mile
high speed train under the supervision of the California High-Speed Rail Authority.
The train would run between San Francisco and Los Angeles, with
Anaheim, California, designated as the southern terminus of the initial
segment of the high-speed train system. Estimates are that the train
system would be completed in 2030, and that it would take passengers
between San Francisco and Los Angeles in about 2 hours and 40 minutes.

I'm naturally inclined to support any kind of governmental support for expanded rail service: My dad's a long-tenured employee of Amtrak, and I've been enjoying intercity rail travel my entire life.  Beyond the personal connection, who wouldn't want to skip the airports and travel from downtown LA to downtown SFO in three hours — skipping the airports entirely and enjoying the roomy comfort of a modern railroad car?

Opponents of prop 1 don't argue that high speed rail is a bad idea, rather they make a three-pronged case against the measure based on conservation, prioritization and skepticism.  Here are the three rebuttal points: First, parks and open spaces would be threatened by rail beds.  Next, California's priority rail transportation project should be building out infrastructure for metropolitan-area commuters to alleviate regional traffic congestion. Third, with America's lousy track record of getting fleeced by European rail contractors, whose to say 10 billion will be the final bill?

All three are valid arguments, but I'll still be voting yes on #1.

California's a big state: surely a rail line can be built with minimal environmental damage…  And we should be moving forward on BOTH high speed rail and intra-city transportation projects.  Finally, while budget overruns will probably be inevitable, I feel this project still justifies the added cost.