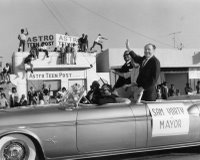 Yesterday I recommended the local political blog Mayor Sam’s Sister City on the strength of reading one good post and an admiration for its slick design.  A few hours later, F.A. reader Pete Warden pointed out in the comments section that “Mayor Sam” is spreading fallacious urban legends about murder warrants for illegal immigrants.   I went back to give Mayor Sam a more thorough read and, on closer inspection, discovered that his political viewpoint is very different from my own.  Mayor Sam is a tart-tongued right winger with a penchant for bashing every Democratic politician from Barack Obama down to the most junior city councilman in Reseda.

I’ll stand by my original recommendation of Mayor Sam though.  He cranks out a ton of information and opinion on local politics — just not all of it ‘excellent’ quality.  If you’re looking for a local Drudge with added commentary, look no further.

And, on a much less political note, let me lend my whole-hearted endorsement to local bloggers “B” and” H.”  They’re new L.A. transplants from Chicago posting regularly on When Are We Going to California?  They just started posting an “L.A. Three Month Report Card” series partially inspired by my own L.A. report card posts last month!  Their first report card post deals with things they’re liking about their new city.  I particularly enjoyed this item:

Bugs- Every time we toured an apartment we kept
asking why there were no screens in the windows. Of course very few
people had an answer but no so long after being here we realized it’s
because there are very few bugs. Yeah the moths were kind of crazy
during the month of April but we never see flies, no mosquitoes,
nothing. Why is that? Honestly if I don’t get an answer I will be just
fine because I am not big on bugs and I am glad they aren’t around as
much here. For you people in other areas or recent transplants to LA –
can you imagine having your window open for hours on end back home on a
warm summer night without screens? Impossible.

LINK: Chicago to L.A. – Three Month Report Card: Things We Like About L.A.