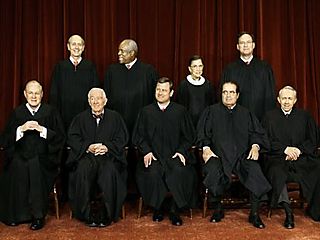 This just in: "A divided Supreme
Court ruled Thursday that foreign terrorism suspects held at Guantanamo
Bay have rights under the Constitution to challenge their detention in
U.S. civilian courts.

The justices, in a 5-4 ruling, handed the Bush Administration its third setback at the high court since 2004 over its treatment of
prisoners being held indefinitely and without charges at the U.S. naval
base in Cuba.

And that last sentence is why I'll be voting for Barack Obama for President this year.  Justice Stevens (second from bottom left) ought to be allowed to retire next year without fearing for the life of the constitution.

[SCOTUS Blog: A True Rightward Turn? The Upcoming Term and the 2008 Elections]