This weekend, I sat down for my first L.A. haircut.  I have to say it was pretty rad, if a little weird.

Most of you are well aware that I’m on roughly a quarterly schedule when it comes to being sheared:  Sartorial splendor is just not terribly high on my list of priorities.  And besides, wearing my hair long makes me look less than my rapidly advancing age.  What you may not know is that for the last three years in New York, I had developed a quiet, but persistent addiction to a moderately upscale barbershop in Chelsea.  And for a guy accustomed to paying $8 bucks a trim from any fresh-off-the-boat Russian emigrant with scissors handy, that was a pretty big step forward. 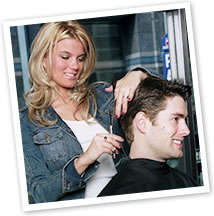 So, when it came time to schedule a haircut here, I knew I couldn’t just go waltzing into the local Supercuts and put my flowing tresses into the inexperienced hands of a recent high school grad with boy problems…   I knew I would need a professional.

After some heavy Googling, I settled on the 18/8 Men’s Haircare and Grooming Center — a small chain of man-targeted shops here in Southern California.  A lot of their marketing material looked ripped from the pages of Maxim…

What could possibly go wrong?

The answer, you’ll all be glad to know, is nothing major.   I walked out of the joint with the haircut I was looking for, and several folks have given my newer, cleaner look a very positive review.  It’s just that  during the act itself, some strange and amusing stuff went on, that led me to feel maybe I’d stumbled into a strip club rather than a hair salon.

After checking in, I was greeted by *Karen,* a *senior stylist.*

"No, I think  we can just get right to it," I offered helpfully.

"You have beautiful hair color; beautiful eye color.  Perfect for highlights.  Would you like me to add a few highlights?" Karen asked.

"Maybe you’ll change your mind later," came her reply.  Now that’s what I call an up-sell … not that there’s anything wrong with that.

Mercifully, the cutting then proceeded pretty efficiently, as a teeny-pop station played quietly in the background.  Then, after the haircut was over, I was informed that as a first-time customer I’d be getting an upgrade to the *executive package.*

Into the shampoo sink went my noggin for a vigorous scalp massage and a tingling conditioner application.  Once my hair was dry, Karen was nowhere near finished with me and proceeded to slather some cream on my neck and shoulders and lay on a very skilled massage.   From there, I really thought the situation was about to deteriorate into a pretty famous episode of Curb Your Enthusiasm.  Instead, Karen finished up the massage, ran some gel through my hair, and put the finishing touches on my hairstyle.

"Maybe next time we’ll try the highlights," she cooed as I stepped out of the chair.