The second entry on Arts and Letters Daily this morning reads:

Vladimir Nabokov wanted all of his final, unfinished work destroyed. Should his son get out the matches?… more» 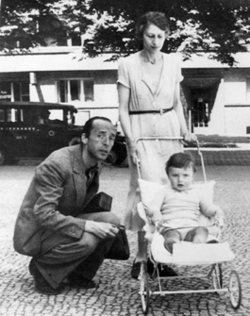 Indeed, Ron Rosenbaum is back on the case in the gripping saga of Vladimir Nabokov’s last literary remnant: An unfinished manuscript and a set of index cards known as "The Original of Laura."

V.N.’s last wishes were that either wife Vera or son Dmitri burn the entire manuscript.

Dmitri (in stroller at left) is now 73 and hasn’t torched the papers yet.  He wavers, Hamlet-like, between carrying out his dead parent’s wish and preserving what he himself
once called "the most concentrated distillation of [my father’s] creativity."

Rosenbaum’s new column in Slate calls on Dmitri to make a choice.  I hope he’ll risk V.N.’s shade’s wrath and keep the thing out of the fire.

Of course, a Nabokov manuscript called "The Original of Laura" makes one wonder whether it has something to do with Otto Preminger’s film Laura, a murder mystery centering on an "original" painting of "Laura."   Rosenbaum wonders too. 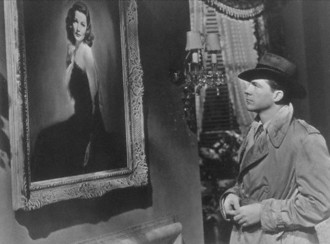 What’s my Angeleno connection here?  Laura the movie is playing tonight at the Aero theater in Santa Monica as part of a Preminger retrospective.  Coincidence?  Did that waxwing fly into the faux-blue window glass by accident?  Who can say with any certainty…