From the ruins, lonely and
inexplicable as the sphinx, rose the Empire State Building and, just as
it had been a tradition of mine to climb to the Plaza Roof to take
leave of the beautiful city, extending as far as eyes could reach, so
now went to the roof of the last and most magnificent of towers. Then
understood-everything was explained : I had discovered the crowning
error of the city, its Pandora’s box. Full of vaunting pride the New
Yorker had climbed here and seen with dismay what he had never
suspected, that the city was not the endless succession of canyons that
he had supposed but that it had limits —
from the tallest structure he saw for the first time that it faded
out into the country on all sides, into an expanse of green and blue
that alone was limitless. And with the awful realization that New York
was a city after all and not a universe, the whole shining edifice that
he had reared in his imagination came crashing to the ground. That was
the rash gift of Alfred E. Smith to the citizens of NewYork. 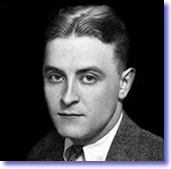 Thus I take leave of my lost city. Seen from the
ferry boat in the early morning, it no longer whispers of fantastic
success and eternal youth. The whoopee mamas who prance before its
empty parquets do not suggest to me the ineffable beauty of my dream
girls of 1914. And Bunny, swinging along confidently with his cane
toward his cloister in a carnival, has gone over to Communism and frets
about the wrongs of southern mill workers and western farmers whose
voices, fifteen years ago, would not have penetrated his study walls.

All is lost save memory, yet sometimes I imagine myself reading, with curious interest, a Daily News of the issue of 1945 :

Bumped Off By Outraged Gunman

So perhaps I am destined to return some day and find
in the city new experiences that so far I have only read about. For the
moment I can only cry out that I have lost my splendid mirage. Come
back, come back, O glittering and white!